I received a free Handy Shower in exchange for testing the product and sending my feedback to the company. All thoughts and opinions are my own. I received no monetary compensation from Handy Shower.

Handy Shower is a multi-functional 3-in-1 personal hygiene system. There are three attachments that allow it to be used as a faucet, shower and a bidet. The company currently has an Indie-Go-Go campaign.

When I first received the kit. I immediately liked how compact it is. Everything fits easily into the carrying case.

The premium kit includes the following:

The reservoir that comes with the kit holds 2 liters of water and is lightweight and compact. It’s easy to fill the reservoir from a faucet or water bottle, but the small cap makes it a little tricky to fill from a natural water source like a river or lake.

The tubing should fit on most water bladders. It didn’t fit on mine, because it has a quick release connection. It’s a gravity fed system, so you could use it with any water container, as long as the shower head is lower than the water container.

The kit came with 3 different spray attachments. I tried all 3, but generally, I used the shower nozzle. I was really impressed with the water pressure. I mainly used the device to rinse off my dogs after runs on muddy trails or at the beach. The nozzle is self- closing, which conserves water. As soon as you stop pressing on the nozzle, the water flow stops.

There are a few different parts that allow you to hang the shower. I found the suction cup very useful for cleaning my bike and dogs after rides and runs.  I could stick that on my car window while rinsing the dogs. The suction cup really sticks! I forgot to take it off my car and drove around for several days – it was still on my car window.

Let’s just say the dogs were not as impressed as I was with this addition to our gear stash. 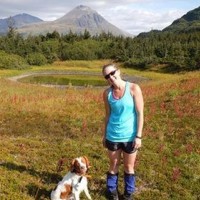 What a neat device! I’ve been looking at some of these portable showers to add to my gear, this one definitely has some cool features. I like that the nozzle is self closing in particular.

Oh wow this camping/outdoor shower looks so handy! HA literally. I’ve never seen one that can also suction to a car window like that before! I’ll have to look into this brand!

The suction cup was a new one for me, but it quickly became one of my favorite features!